It looks like my spider wasps are still around, after spotting one carrying a spider to her hole a few years ago I haven’t since witnessed any with pray but I assume they’re still nesting on the back of the house. 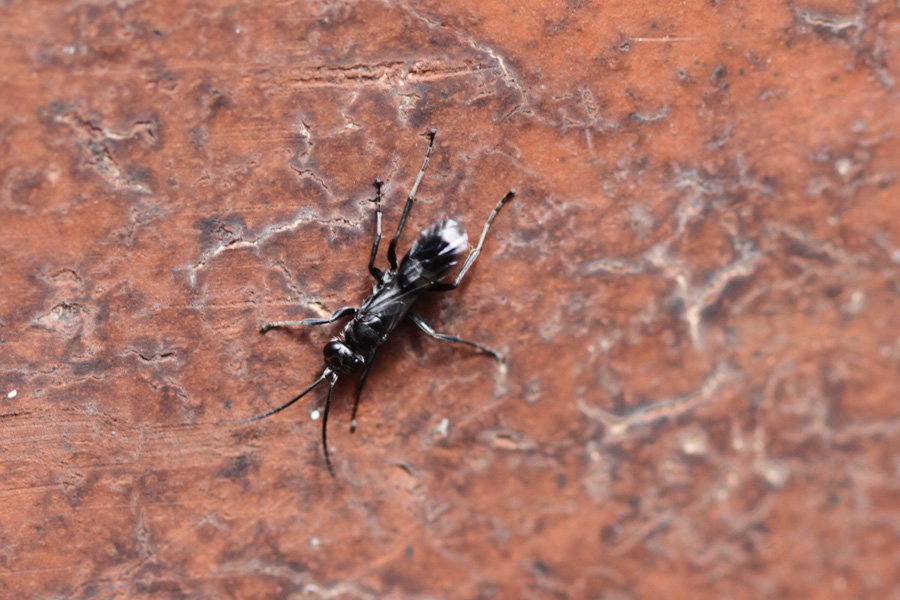 I found this little one resting on the wall for a few minutes. We’re getting to the time of year were drunk bees are quite common. 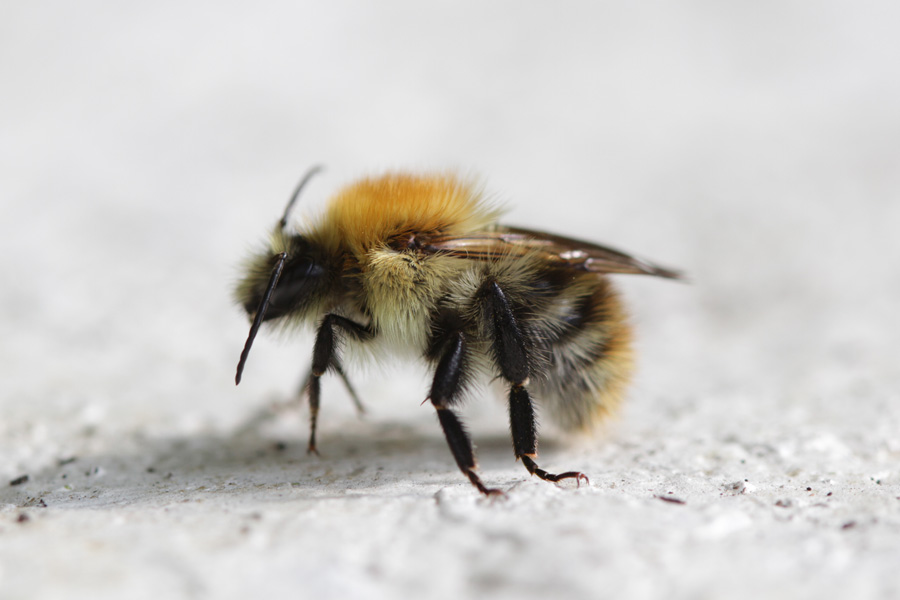 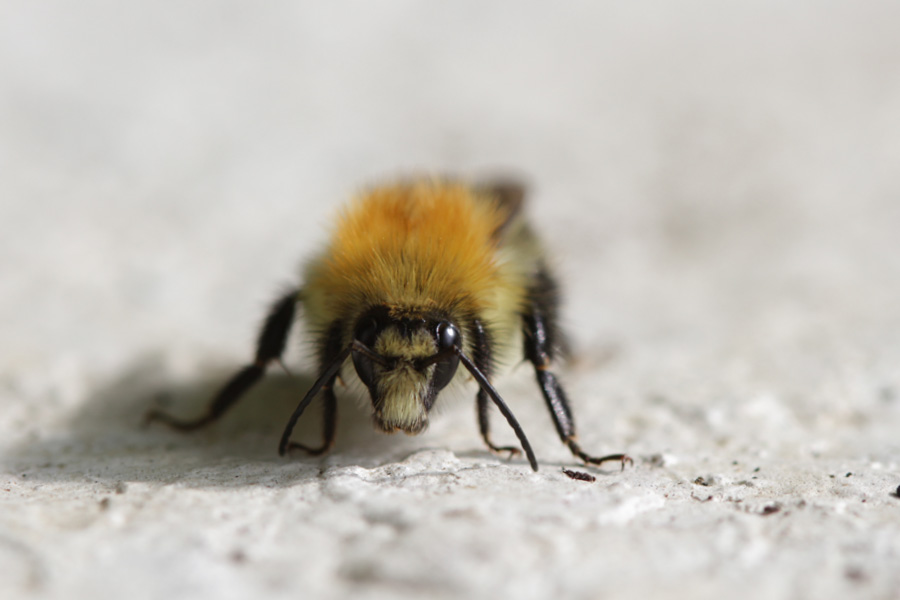 This one I’m unsure whether it’s a Bee or a Wasp. It sort of looks more Beeish to me, but its long, thin abdomen is more wasp-like. 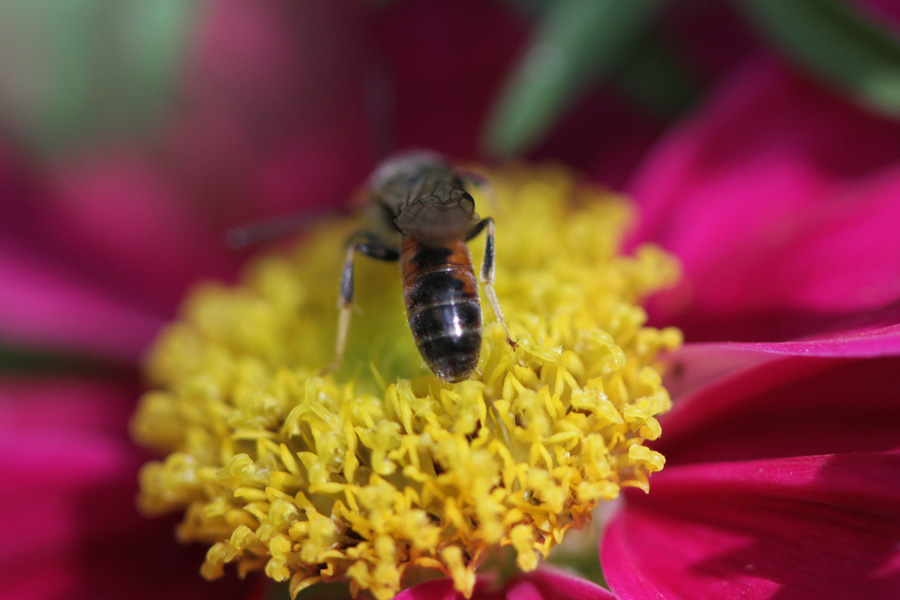 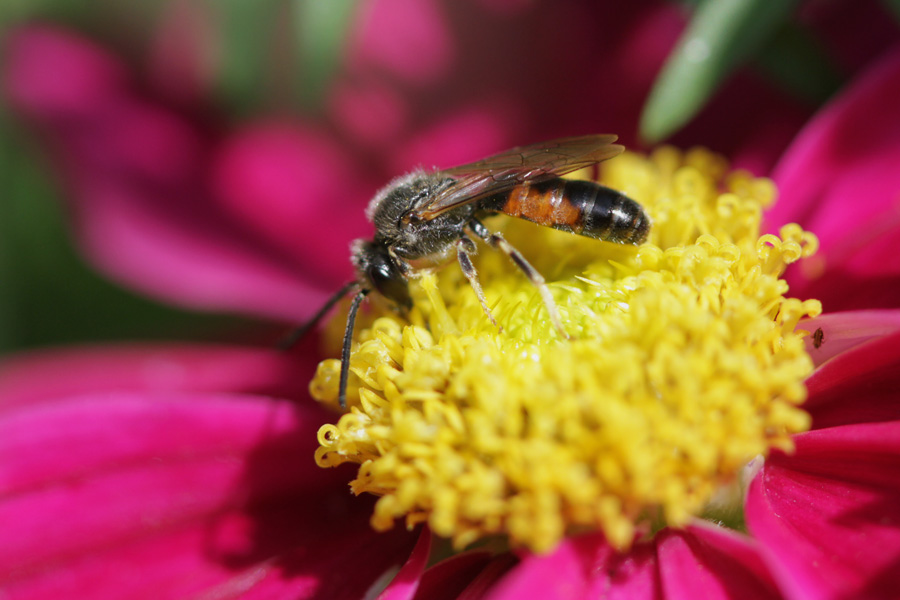 I was sat in the sun and my brother mentioned he just saw a little Bee going into the ‘Bee house’ with some leaves. Of course I was very surprised as thus far nothing has ever bothered with it. And just as once again I’d been considering getting rid of it, there’s activity!
The bee in question must’ve been a leaf cutter bee, and if my rose leaves are anything to go by, we should have plenty more next year!
So, as I’m checking the little bamboo holes for it to come out, I notice lots of Caterpillar/Sawfly Larvae… 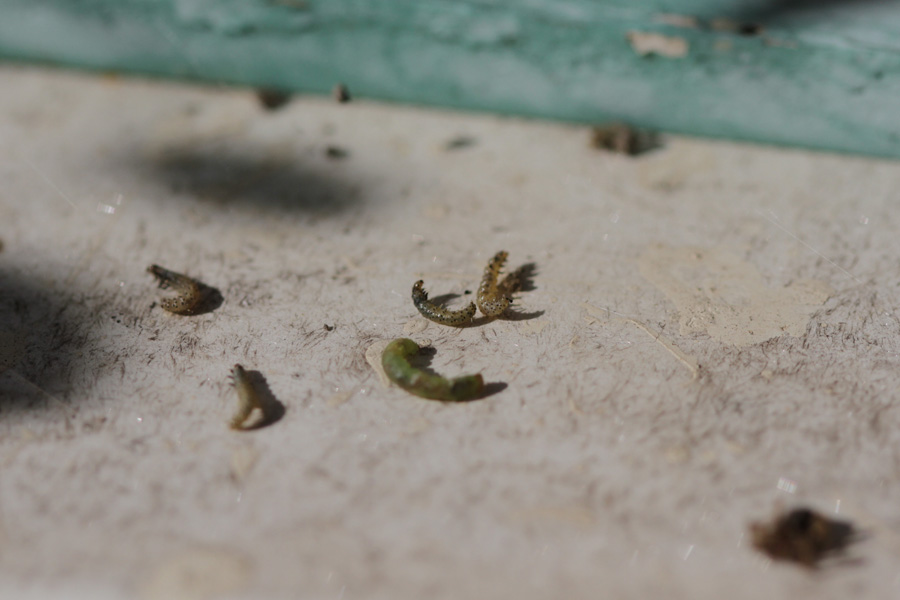 What’s going on here then?? And on closer inspection I could see a few wriggling around in one of the Bamboo lengths.

After waiting a while, I see a small Wasp going in. Sure enough, it’s a Wall Mason Wasp taking in stunned prey which will feed its young once they hatch. In the top photo you can make out a green blob under the abdomen of the wasp; another caterpillar it’s found. 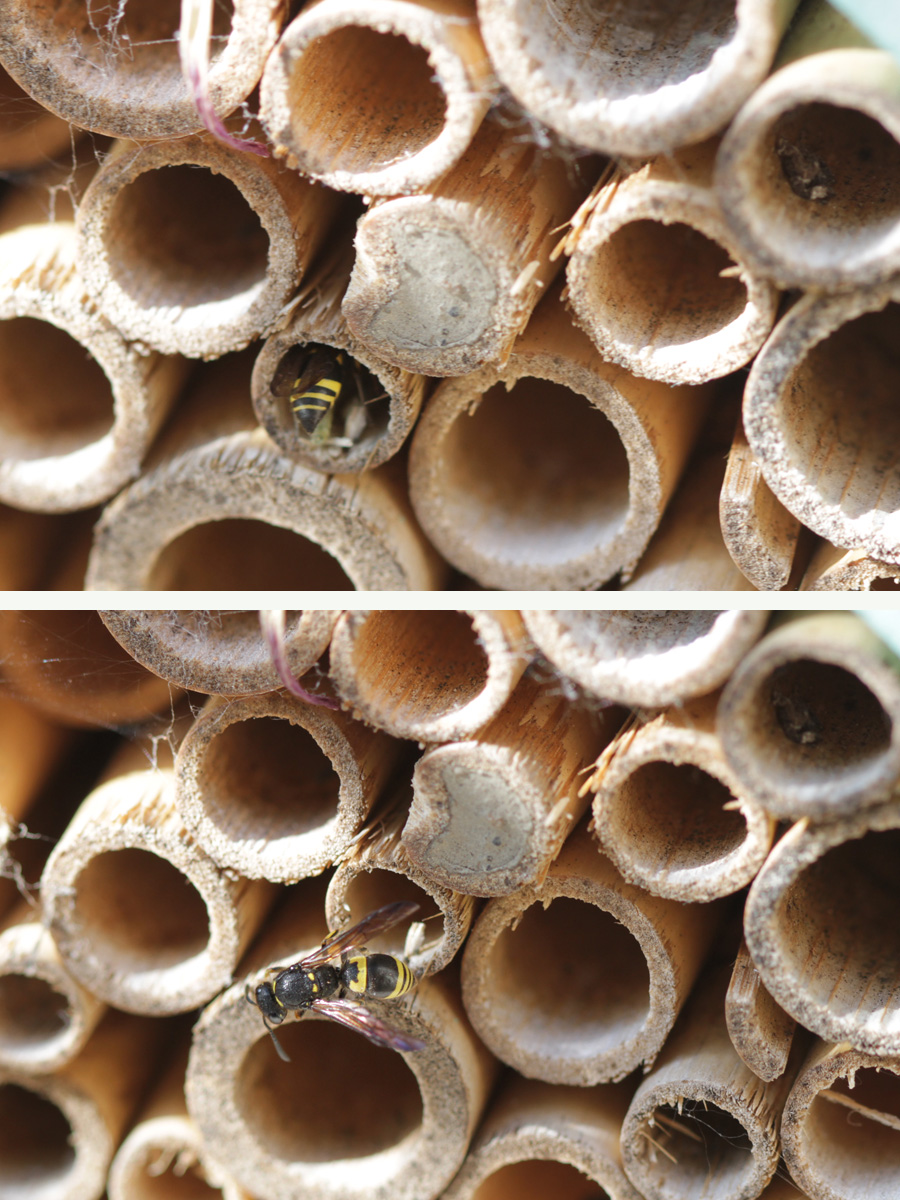 Notice the Bamboo to the top and right? It’s been sealed over with what looks like mud? Well, that’s the Wall Mason Wasp (also known as Potter Wasp) at work too. To date it’s filled two.

I also have this one in the wall – a hole made by the wasp or was it there already? I wonder if something has hatched from this as it still hasn’t been filled in. 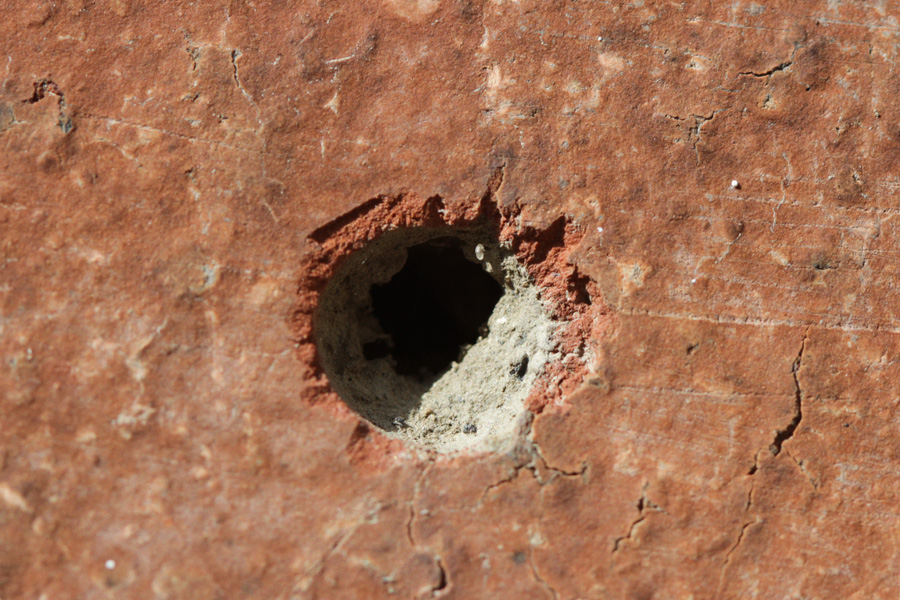 Ah, but not all is perfect for the Wall Mason Wasp…

As this little guy is waiting nearby. 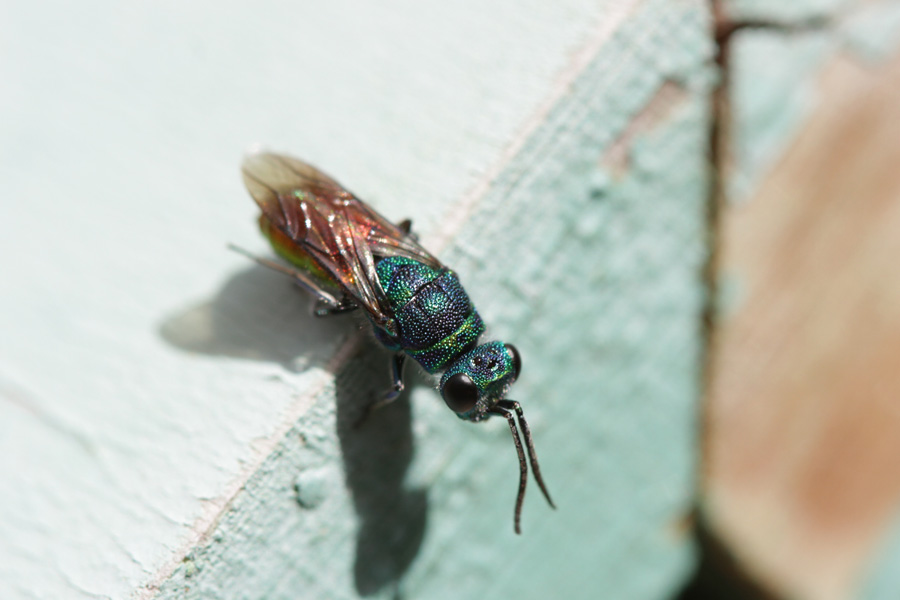 This, my friends is the Ruby-Tailed Wasp. It likes to parasitize others by waiting for them to go, before reversing into the chamber, laying its eggs which will then hatch and eat the egg and caterpillars. Generally they use Mason Bee nests, and I must admit that I didn’t witness it entering the Wall Mason Wasp nest and I sat there a good long while, so maybe Mrs Mason’s young will be lucky. 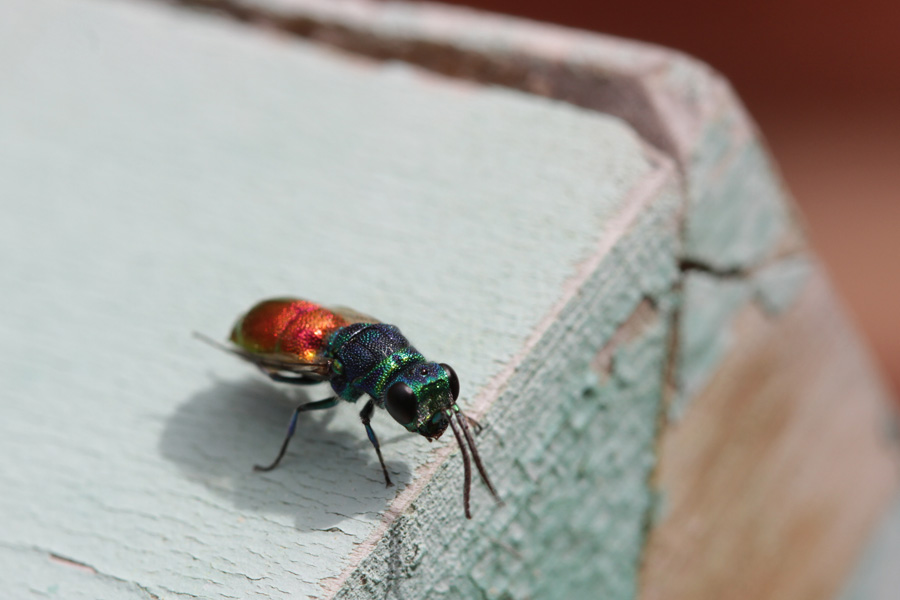 Shame really, as it really is beautiful.